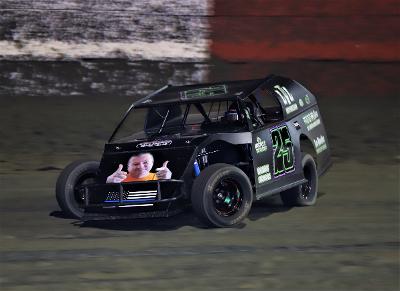 LJ Grimm is an “asphalt” guy that is going dirt racing in an open wheel modified (OWM) for the first time, and chose the Winter Nationals for the debut. He brought with him a crew and group of family and friends with an impressive array of racing experience that have a huge combined number of years of experience.

The group in LJ’s pits included Shane Butler, Devin McCleod, Stan Butler, Landon Butler, (the hardest working young man in any pit, anywhere) sponsors and family members. All having specific duties (Devin only has one job) and taking on whatever else arises and needs to get done. You will regularly see this group together at other events, supporting each other (and competitors) in any way they can. They are laser focused on the task at hand, yet it is accomplished with persistent humor and digs on each other. They ooze humble confidence while working towards betterment after each session on track. Throw in the additional family members and you complete the group that embodies everything that is good about short track racing. In plain terms, it is a bunch of folks that love and are passionate about racing and they are having a damn good time doing it.

LJ obtained a previously raced OWM and got it ready to race again. For me, this where it gets interesting. He has some previous experience on dirt with some seat time in a sprint car, so the desire to add more dirt races was not surprising. What was, were the races chosen for the first ones. The Winter Nationals at East Bay Raceway. Winter Nationals is a long-standing tradition and regularly draws 40-60 competitors depending on the year. The quality of competition is quite high with some of the best OWN shoes in the country at this event each year. LJ is certainly not short on talent, but a learning curve is expected in this scenario. I expected for him to be up to speed and possibly competing for top fives at the end of the week.

Practice on Monday and night one on Tuesday went well. They earned a 12th starting spot in the A main and finished 14th. It appeared that much was learned and most likely a game plan for night two was in the works. As expected, there was improvement each time on track and they have the program going in the right direction.

The forward momentum continued on night two as expected. But they skipped a few steps of my now obviously flawed expectations for them, and qualified 4th overall. Surprise and excitement were in the air. In typical fashion though, the most you get from them is a quick “hell yeah” and the focus quickly shifts to making the car better for heat races. They started 2nd in the heat and convincingly won said heat race.
The A main saw LJ starting in the 7th spot. He has a decent shot at running up front, on night 2! An unlucky restart saw LJ fall back to around 16th or so. Persistence and a bull dog mentality behind the wheel steadily elevated his position. Regaining a spot here and a spot there, and visibly seeing the driver become more comfortable and confident with each lap. He eventually brought the car to a 7th place finish. One has to wonder what would have been, would luck have not failed him on the restart. We all know that you must have a little luck to go along with the talent to obtain the desired results. When that luck swings their way, they will take full advantage.

Their expectations for the final three nights of this event have to be high. And rightfully so. The set up on the car, and the driver both continue to evolve and improve with each and every lap turned. Regardless of the outcome of the second half of the week, this group has much to be proud of and should hold their heads high. But my feeling is that they are just getting warmed up.