In his best top fuel dragster impression, Matt Craig burned down the Hoosier tires on his No. 54 car after capturing his first career CARS Super Late Model Tour powered by VP Fuels win in the Leftturns and Sunburns 200 at Greenville Pickens Speedway on Saturday night.

For the eighth time in his 15-race CARS Tour career, Deac McCaskill led the field to green and led the opening third of the race until Chad McCumbee took his turn at the point beginning on lap 30.

A couple of late-race crashes, the worst of which eliminated Craig Stallard, Justin Carroll and Robert Tyler from the event, set up a series of restarts that ultimately played a pivotal role in the outcome of the 100-lap race.

The final caution of the night for Will Burns’ wrecked car on the back straightaway put the No. 27 of Tommy Lemons to the outside race leader Chad McCumbee. When the green flag fell, it was an all-out dash to turn one, and ultimately the finish, with Lemons prevailing from the outside lane off of turn two on lap 92. 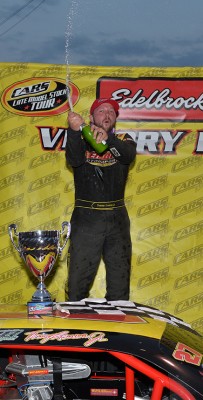 Tommy Lemons captured his long-awaited first career CARS Tour win at Greenville Pickens Speedway on Saturday in the Leftturns and Sunburns 200. He led the final eight circuits after bypassing Chad McCumbee on a late-race restart in the late model stock car portion of the event.

Lemons stretched his lead over the final eight laps to claim his first career CARS Late Model Stock Tour win in 15 career starts with McCumbee also finishing a career-best second. Dylan Hall brought home a third place finish in his debut with the tour, while  Josh Berry and rookie Chase Purdy rounded out the top five.

“This is a big win right here,” said Lemons in Edelbrock Victory Lane. “This is a brand new car and it’s only been run in the CARS Tour this year. We’ve been really fast with it in the race and have been struggling in qualifying and we finally got it figured out. It’s just bad to the bone right now.

“I learned a little bit on the outside on those restarts late in the race with worn out tires,” he continued when asked about the pass for the lead. “I just wanted it. We kinda gave one away at Tri-County two weeks ago and I just felt like we had to go get it today. This doesn’t really change what we come to the racetrack for. We come for trophies and as long as we get those, we’ll be there at the end for the championship.”

The CARS Tour Super Late Model Tour powered by VP Fuels event was all about Matt Craig and the No. 54 C&C Boiler Chevrolet. After rolling out as the final car in qualifying, Craig snatched the Mahle Pistons Pole from Cole Timm and led the field to green with Timm to his outside.

Craig quickly shot out to the lead and began to control the pace of the event until the first caution of the evening flew on lap 19. Stephen Leicht lost control of his Jani-King Chevrolet while racing with Tate Fogleman on the backstretch and made hard contact, nose-first, with inside wall that ultimately ended his night.

Another caution on lap 31 for Jody Lavender’s stalled car in turn two set up a restart that would be the lone test for Craig on the night. Soon after the field resumed competition, Harrison Burton discovered a way around Craig on lap 38. The lead for Burton was short lived, however, as Craig motored past Burton nine laps later and began to pull away on lap 47.

Craig’s lead continuously grew over the final 53 laps. Cole Timm, Zane Smith, Brandon Setzer and Anthony Anders all surged forward late in the race as they attempted to chase down the No. 54, but their efforts fell short as the event went green to the finish and no one ever made a serious challenge to Craig’s dominance.

Craig cruised to victory with a 5.569 second margin of victory, the second-largest in CARS Super Late Model Tour history. Timm, Anders and Smith were the next trio to the stripe, while point leader Raphael Lessard rounded out the top five finishers.

“That thing was amazing. I can’t thank everyone who’s helped me enough, especially my dad for all the time he’s spent at the racetrack. I can’t thank Shawn and Jason enough and I really need to thank Clay Rogers and Gary Crooks,” Craig commented in Edelbrock Victory Lane. “There’s no way I’d be where I am today without their help, just how to drive them. When I first started driving these things, I didn’t like them at all and I was ready to go back to a heavy car like ARCA or ProCup used to run. They taught me how to drive them and with a little bit of luck, I’m just happy to be here.

“When I was behind Harrison, I was just playing with him. I wasn’t even pushing it. I was probably running 10%,” he continued when asked about how hard he was using up his equipment. “Every now and then, I’d gas up and point inside of him a little bit to let him know what’s going on, but then I was riding and I was getting kinda bored. So I just hammered down coming off of four and passed him, it was a great race.

“I had a few prayers in the last ten laps. I was leading a race like that a few weeks ago and a caution came out. That’s your worst nightmare. But this is a great thing to go on the resume, there are a ton of great guys here to race against and it really means a lot, it’s really special to me.”