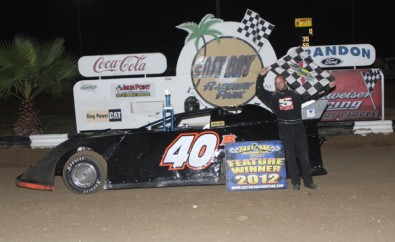 November 10, 2012 – Tampa, FL – The Top Gun Sprints made their way back to East Bay Raceway Park running their make-up race from October 6th. Along with the Sprints were the Late Models, Limited Late Models, Street Stocks, Motorstats.com 4 Cylinder Bombers and Fan Participation.

At Intermission it was Steve Ashmore back in Victory Lane winning the Fan Participation races. Then came the Limited Late Model Feature. Jason Pope and Shane Koperda won their heat races. For the feature event it was Forrest Gough and Jeremy Simpson making up the front row. When the green flag waved it was Gough leading early. On lap five the first caution came out as Koperda spun in turn one battling with Jason Russell. The green waved again and it was Gough leading the way until lap ten when Gough turned left into the infield and handed the lead over to second place Jeremy Simpson with Roger Crouse right on his back bumper. Simpson went on to win his very first feature win ever holding off the Veteran Roger Crouse. Rick Martin, Jason Russell and Shane Koperda rounding out the top five.

The Top Gun Sprints were next with the 25 lap Non-winged feature event. AJ Maddox and Danny Martin, Jr. won their heat races and were eligible to pick up an extra $100 dollars for the Barfield Sweep along with the $1,000 to win sponsored by Boomtrux.com. For the feature it was Dennis Misuraca and Tim George making up the front row for the feature. Misuraca led the first few laps until Martin, Jr. went flying by Misuraca on lap three. The first caution came out as Mark Ruel, Jr. slowed over in turn two.  That closed up the field with AJ Maddox right on Martins back bumper.  As the field went down the backstretch into turn three, Martin, Jr. slide up towards the wall and came to a stop bringing out another caution. Martin, Jr. was pushed into the pits ending his night and Maddox was the new leader.  Maddox never looked back and went on to win his fourth feature win of the year. “I was only half throttle as the cushion got thinner “ Maddox said in Victory Lane. Tony Agin, Billy Boyd, Jr., Matt Kurtz and Ruel, Jr. rounding out the top five.

Kyle Bronson, Roger Crouse and Rich Pratt won their heat races as the Late Model 25 lap feature event was next. Hayden Campbell and John Koller made up the front row for the feature event.  Koller took the early lead and led for the first ten laps until Crouse took over the top spot. Lap thirteen, Pratt slowed down on the front stretch and brought out the first caution. On the restart, David Schmauss got tangled up and backed his car into turn three wall ending his night. On the restart Kyle Bronson who was up in the top three got by Crouse and went on to win his first feature win in only his second time in a Late Model. “I want to thank all my guys for helping out, and also thanked his car owners Wayne and Shirlene Hammond for giving him the opportunity to drive for them” he stated in Victory Lane. Crouse, Phillip Cobb, Jack Nosbisch, Jr. and Campbell rounding out the top five.

Street Stocks were next with Dorsey Strickland and Thomas Burnside winning their heat races. Jarod Gay and Buck Woodhouse made up the front row for the feature event.  Jarod Gay led for the first seven laps until the first caution came out as Brad Tindell spun in turn four.  On the restart, Gay once again led the field into turn one with Eric Moon charging thru the field and right on Gay’s rear bumper on lap eleven. But on lap twelve Jarod’s transmission shattered all along the backstretch handing the lead over to Moon. Moon went on to win his seventh feature of the season extending his points lead over Donnie Reed. Thomas Burnside, Strickland, Dennis Wilson, Jr. and Matthew Grissom rounding out the top five.

Last feature of the night belonged to the Motorstats.com 4 Cylinder Bombers. John Moore, Patrick Tabb and Brett Calonge won their heat races. Robert Kissam and Richard Humfeld made up the front row and Kissam was looking to make it 4 wins in a row. When the green waved it was Kissam taking the lead followed by Humfeld and Moore. The first caution came out for debris on the front stretch with Kissam holding on to first place. Moore was doing everything he could to get by Kissam but was not able to as Kissam went on to pick up win number four. But on the cool down lap, Kissam’s motor expired. “I heard it making noise with just a few laps to go and was hoping it would make it” he said in Victory Lane. Moore finished second with Humfeld third, Thomas Burnside finished fourth and Troy Dittebrand rounding out the top five.

ASA Racing continues next week as the Top Gun Sprints return as they put the wings back on and run for $1,000 to win sponsored by Boomtrux.com. Also running will be the Outlaw Fours, Motorstats.com 4 Cylinder Bombers and the Florida Old Time Mods. For further information, log on to www.eastbayracewaypark.com or call 813-677-7223 for more information.