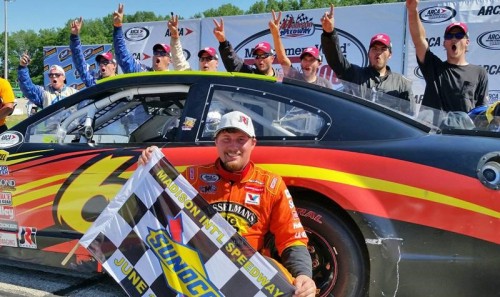 MADISON, Wis. (June 19, 2016) – Josh Williams said after his career-first victory at Nashville back in April that he was going to win more races. He was right. Williams, in the family car, held off a hard-charging Kyle Weatherman to win the Montgomery Ward Father’s Day 200 Sunday afternoon at Madison Int’l Speedway.

After eight different winners in as many races, Williams, in his own No. 6 Southwest Florida Cable Construction Chevrolet, became the first repeat winner of the 2016 ARCA Racing Series presented by Menards season.

“This was a complete group effort today,” Williams said. “We weren’t even supposed to be here. We’re down on funds, and we came off the chassis dyno 45 horsepower down…not sure why. Other than that, the car was really on it today. It was so hot that being down on horsepower probably didn’t hurt as much. I just want to wish my father a happy Father’s Day watching back home in Florida.”

On advice Williams remembered from his dad Kevin Williams, he out-dueled Weatherman on a restart just past the halfway point and continually fought the field off from there.

“I swear I could hear my dad in my headset…he always preached to me the way to win races was to get ’em on a restart. He preached that to me from day one…that’s exactly what we did.”

Weatherman, in the No. 98 Mason Mitchell Motorsports (MMM) Chevrolet, was catching the eventual winner in the end but fell short by three lengths at the checkered flag, finishing second in his first start with the MMM team.

“It took two or three laps to get the right temperatures in our tires, but after that, the car really came to us,” Weatherman said.

Weatherman got to Williams’ rear bumper inside of 30 laps to go, but got tangled up with a lapped car in turn four on lap 179.

“Lapped cars killed us today, but that’s the way it goes…it was a really fun race,” Weatherman continued. “I can’t thank Mason Mitchell Motorsports enough…hopefully, we can take it to Winchester.”

Weatherman’s spin brought the final caution out, sending all the lead lap machines to pit road for right-side tires only, all hoping to get the jump off pit road.

Local Wisconsin favorite Ty Majeski, who had been running second during the back half of the race right on Williams’ rear bumper, gambled on a pit road strategy that all but eliminated his chance to win.

“We were trying to free the car up on that last stop,” Majeski said. “We chose to give up two spots to take a big swing at the car. We ended up over-adjusting on the car. In hindsight, we wouldn’t have done that, but that’s okay…I learned a lot today. I think we had the fastest car. The Roulo Brothers gave me a great car. I really appreciate the opportunity…hope I get another one.”

Majeski, in the No. 17 Potawatomi-Montgomery Ward Ford, crossed the finish line in fourth.

Nicole Behar turned herself into another crowd favorite, and for good reason. The Spokane, Washington driver, in her career-first ARCA start, got ruffled up early but battled back to finish third in the No. 55 TRD Toyota.

“I can’t thank Venturini Motorsports and Toyota enough for this opportunity,” Behar said. “My first time in an ARCA car…I really enjoyed it. I need a little more discipline but that will come with being in an ARCA car more. Don’t drive it in so hard…they were on me every single lap, in my ear as a constant reminder. This was awesome. ARCA is the next big step for me…learning how to race on these radial tires.”

Tom Hessert got two Free Passes, which enabled him to finish fifth on the lead lap in the No. 25 Venturini Motorsports Toyota.

“We were really good early on in the run, but track conditions changed and we got so tight,” Hessert said. “Could never get it back. A top-five…all good. Onto Winchester.”

ARCA point leader and Menards Pole by Ansell winner Chase Briscoe led the first four laps before the first caution flag waved for Ed Pompa’s car, which stopped on the track. Weatherman then out-maneuvered Briscoe on the restart to take on the lead, and stretched his lead to a half-straightaway before he and all the leaders came down pit road for four-tire stops on lap 108. Weatherman also won the race off pit road for the restart. However, Williams, with his dad’s chorus echoing in his head, raced his way around Weatherman on the restart to take over the lead on the 114th lap. From there, Williams fought off both Weatherman and Majeski to earn his second career ARCA victory.

Briscoe finished sixth in the No. 77 Big Tine Ford, the last car on the lead lap. Matt Kurzejewski finished one lap down in seventh in the No. 52 Ansell-Menards Toyota. A.J. Fike was eighth in the No. 27 MatrixCare-Consonus Healthcare Ford. Thomas Praytor finished ninth in the No. 9 DK-LOK-Project Semicolon Ford with Will Kimmel trailing in 10th in the No. 22 E3 Spark Plugs Ford.

The race is live on the American Sports Network. Live timing, scoring and chat at arcaracing.com.