JEGS Extends Sponsorship with CRA Through 2015 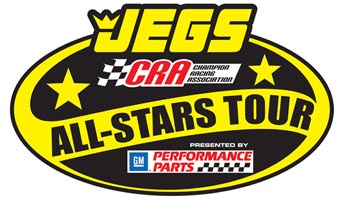 Salem, IN (November 5, 2012) – Champion Racing Association officials have announced that JEGS, the nation’s leader in high-performance auto parts, has agreed to extend its partnership with Championship Racing Series and its JEGS/CRA All-Stars Tour Presented by Chevrolet Performance through the 2015 circle-track season. John Coughlin, the son of JEGS founder Jeg Coughlin, signed the extension at the series last event of the season on October 27th at Watermelon Capital Speedway.

“We love what the series has to offer to drivers and teams, and it’s a perfect match for us,” Coughlin said. “JEGS has been involved in drag racing for many years, and we recently decided to venture into oval-track racing. The JEGS/CRA All-Stars Tour is crucial to that endeavor, and we look forward to many years together.”

The template bodied crate motor asphalt late model series sanctioned by Champion Racing Association just completed its 16 race 2012 season that included 14 points events at 12 different race tracks in Michigan, Indiana and Ohio, along with two non-point South events at Watermelon Capital Speedway in Cordele, Georgia. The series first event of the 2013 season will be a 100 lap South event with SpeedFest 2013 back at Watermelon Capital Speedway.

“We greatly appreciate JEGS extending their commitment to CRA through the 2015 season,” Series Director Glenn Luckett said. “Everyone at JEGS has been great to work with. We could not have even started this series without their great support and with their continued support this series will continue to grow and be the premier crate Late Model series in the country.”

Check out JEGS full line of high performance parts at www.jegs.com. More information on the JEGS/CRA All-Stars Tour Presented by Chevrolet Performance is available at www.craracing.net.