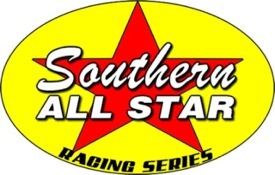 (March 4, 2013)—Jared Landers of Batesville, AR made a clean sweep of the 2013 edition of March Madness at Cherokee Speedway on Sunday Evening March 3rd co-sanctioned by the Southern All Stars Dirt Racing Series and the Carolina Clash Super Late Model Series.

This was back to back March Madness wins for the driver of the Clint Bowyer Motorsports entry. This was also Landers’ first-career Southern All Stars Dirt Racing Series victory as he opened the 31st year of competition for SAS leading all 60 laps of the main event for the $10,000 payday after starting in fourth spot. Landers also became the 158th different winner in series history.

Seven caution flags slowed the 60 lapper. The first yellow didn’t come until the 15th lap when Mike Marlowe slowed. The next yellow was on lap 18 when John Garvin Jr. spun. On the 24th lap Doug Sanders would spin in turn four. It would take two more tries at getting the race restarted because of various spins. The final yellow came out on lap 53 as Casey Roberts came to the pits with a right rear flat tire.