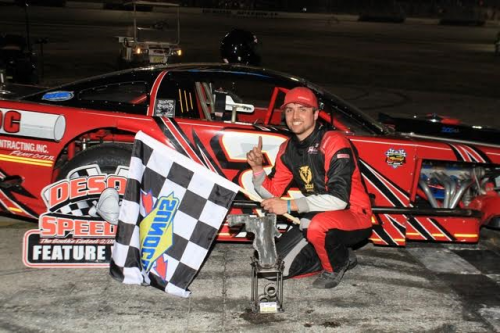 In the Q Auto and Injury Attorneys Desoto Pro Truck main event, Hogan started on the pole and grabbed the lead at the start of the opening 50-lap segment from Jeff Guilbault and Steve Darvalics. He held a slim lead when the caution flew for Cameron Cruse’s spin in turn one just after the field completed 11 laps.

Hogan withstood a series of challenges on a rash of restarts over the next 14 laps. Darvalics made a move for the lead and had just cleared Hogan before the caution flew at the halfway point – meaning that Hogan would keep the lead for the next restart – a restart that saw four trucks eliminated in a crash as the field came to the green flag.

Darvalics and Danny Anderson took shots at Hogan for the lead, but Hogan held on to win the segment. After a 5-minute break, Hogan led every lap of a caution-free, 30-lap second segment.

That set up a 20-lap showdown between Hogan and Darvalics at the front of the field. Darvalics made one last-ditch effort coming into turn three on the final lap, but Hogan got the run coming off the final corner to finish the sweep.

“Steve is always really fast here so it was huge to stay in front of him,” Hogan said. “He had me a couple of times, but it worked out really well for us.”

A strong field of some of the state’s best drivers were on hand for the Florida State Modified Invitational. For the first 70 laps Doug Moff led a four-car freight train with Cody Stickler, Devin McLeod and Josh Todd directly in tow.

Stickler, who won four races during the World Series of Asphalt at New Smyrna Speedway earlier this month, made several attempts to get the lead but was unable to finish the pass on Moff.

With 25 laps to go Stickler slid high in turn one, allowing McCleod and Todd to get by. Five laps later, Todd and McLeod got together getting into turn three. McLeod was able to continue with no damage while Todd was sent to the rear for causing the spin.

McLeod lined up outside of Moff for the final restart with 10 laps to go. The pair raced side-by-side for three laps until McLeod finally cleared Moff as the field completed the 93rd lap. McLeod set sail from the rest of the pack and drove on to the win.

“That was probably the best race I’ve ever driven in my life,” McLeod said in victory lane. “We rode behind Stickler for all those laps and I was surprised he didn’t pull the trigger a little sooner. It all played out like it was supposed to.”

Moff held off Stickler for second. Wayne Jefferson drove from sixth to fourth in the final lap. D.J. Hoelzle rounded out the top five.

Jeff Firestine controlled the early stages of the 25-lap Take Aim Gun Range Street Stock feature. As the field came to the halfway point of the race, contact between Codey Benoit and Jarrett Cornell sent Cornell into the wall and brought out the caution.

Benoit was allowed to keep his spot and was able to pounce on Firestine to take the lead immediately after the restart. Ander Jackson quickly worked his way up to second but ran out of time to catch the leader as Benoit took the victory. Firestine finished third.