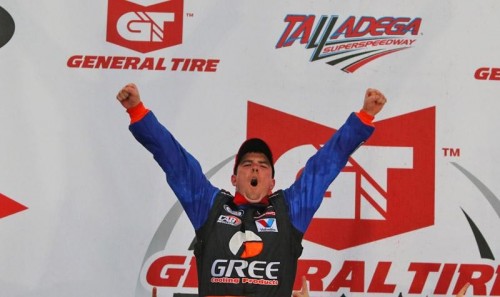 TALLADEGA, Ala. (April 29, 2016) – Bluffton, South Carolina rookie Gus Dean had just enough momentum to inch ahead of Josh Williams when it counted most to win the action-packed General Tire 200 Friday afternoon at Talladega Superspeedway.
Dean, in the No. 98 GREE-Cab Installers Chevrolet, powered ahead of Williams down the backstretch just as the final caution came out for a multi-car crash behind the leaders. With weather approaching, accompanied by lightning, series officials put a period on the race two laps shy of the intended finish. The margin of victory – about two feet.
It was quite a turn-around for Dean, who was part of a multi-car wreck in the opening laps at Daytona, his only other ARCA Racing Series presented by Menards start.
“For such a build up to that race at Daytona…it was such a heartbreak to go out that way,” Dean said.
“I’m just so grateful for my sponsors GREE and Cab Installers. They took a chance on me and allowed me to come back and take another shot at this. I can’t thank Mason Mitchell Motorsports enough. No one is more meticulous when it comes to building race cars…piece by piece…he’s such a pro. It’s such a privilege to have a past ARCA champion as my driver coach. He’s really helped me through the learning process.”
When the race was over, both Dean and Williams circled the speedway side by side while series officials determined who was ahead at the exact moment the caution lights came on.
“Initially, I heard on the radio that Josh Williams had won the race. But we felt very strongly that we were ahead at that moment. We asked for a review. Those moments felt like hours to me.”
Williams, in the No. 6 Musselman’s Applesauce Ford, was credited with the second finishing position after leading six laps.
“We had a really fast race car today,” Williams said. “We thought we were ahead at that moment, but that’s not the way the officials saw it. Toledo’s next up…we’ll just go win there. This is still really big for us. This is a little family-owned team…low budget deal. When you look at what we have compared to most everyone else, it’s very humbling. Thanks to Musselman’s for their help. We’re going to win some more this year…I guarantee it.”
Chase Briscoe finished third in the No. 77 Cunningham Motorsports Dodge and unofficially took over the points lead after previous points leader John Wes Townley cut a right-front tire after making contact early on with Bobby Gerhart. Townley finished 29th.
“It was definitely intense out there,” Briscoe said. “There was a lot of four-wide racing. We got out of line early in the race and fell back but Will (Kimmel) got behind us and got us back up there…got us back in contention. It was a really good points day for us. Last year I was here volunteering for Cunningham Motorsports. Briggs Cunningham and Kerry Scherer (team owners) took a chance on me and here I am. I couldn’t be more grateful for this opportunity.”
Tom Hessert, who won the Menards Pole by Ansell, led the most laps (23), but got shuffled back late in the race. The Cherry Hill, New Jersey driver battled back to finish fourth in the No. 25 RelaxWraps.com-Cometic Toyota.
Will Kimmel was also a factor all day, leading 16 laps before settling into the fifth finishing position in the family-owned No. 69 E3 Spark Plugs-CO Contracting Chevrolet.
Dalton Sargeant finished sixth in his superspeedway debut in the No. 55 Toyota Racing Development Toyota. Sean Corr steered the No. 48 Nesco-Support Our Troops Ford to seventh in the final running order, ahead of Matt Kurzejewski in eighth in the No. 52 Ansell-Menards Chevrolet. Shane Lee finished a career-best ninth in the No. 32 LeeBoy Toyota. Local Munford, Alabama favorite Bret Holmes finished 10th in the No. 23 Southern States Bank-Veteran’s Oil Chevrolet.
Dean led 21 laps to Hessert’s 23, making just one pit stop for fuel only.
“That’s all we needed was gas because these General Tires are just as good on the last lap as they are on the first. These are, bar none, the very best tires I’ve ever raced on. With the General Tires, you can race from start to finish and go as hard as you want to.”
Bo LeMastus led eight laps but was part of a multi-car wreck, also on the backstretch that also involved George Cushman and Terry Jones. The multi-car wreck that prompted the finish included the cars of Dustin Knowles, Bobby Gerhart, Mark Thompson and Korbin Forrister. There were no injuries.
The next event for the ARCA Racing Series is the Menards 200 presented by Federated Car Care at Toledo Speedway May 22, live on the American Sports Network.