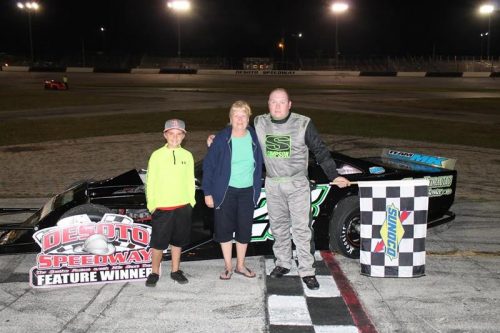 Bobby Baldwin inherited the lead with Grimm directly in tow. Grimm passed Baldwin for the lead with a crossover move on Baldwin just prior to the halfway point. Grimm was on cruise control out front when the third place car of Ryan Walters spin with nine laps to go. Baldwin couldn’t capitalize on the final restart, and Grimm drove on to the victory.

Grimm, like many other drivers over the course of the evening, stopped his car at the spot in turn two where Steele lost his life last week during his victory lap. Several fans also placed flowers on the fence near the site during the night.

“I watched Dave win a bunch of sprint car races here. He was one of the best,” Grimm said in victory lane. “Hopefully this will be part of the healing process. It’s not much, but it’s a little something for Lynn, the kids, Mac and Carol Steele.” Baldwin and Donny Duchesne rounded out the podium.

The Sportsman division also kicked off their Triple Crown with a 35-lap feature. Aaron Williamson and Mark Peterson got by early leader Tom Zimmerman and rocketed away from the rest of the field. Paul Huffstutler spun in front of the leaders at the 20-lap mark to bring out the caution.

Williamson cleared Peterson on the restart and pulled away for the victory. Zimmerman, Ben Kelly and Austin Carr rounded out the top five.

Jason Bartram started on the pole for the 25-lap Take Aim Gun Range Street Stock feature and wanted to make sure he’d stay there for the duration of the event. As the field came to complete the opening lap, Lee Hobbs got loose coming out of turn four and collected Cody Coffman. Coffman hit the wall nearly head-on but was uninjured. Bartram broke away from John Brown, Donnie Powers and Travis Barfield on the restart and drove out to a big lead. Barfield went from fourth to second in the closing laps but ran out of time to challenge Bartram in the closing laps. Brown finished third.

The Desoto Strictly Stocks were also on hand for a pair of races. Kyle Case got by Steve James about halfway through the 15-lap Road Course race and drove on to his first career victory. Case also won the flagpole race.
In other action Saturday night, Ren Wright Jr. Held off Laura Mammina in a side-by-side finish to win the Mini Stock feature; and Seth Adams needed just a handful of laps to charge all the way from the back of the field before he drove away with the 25-lap Legends feature. During the intermission, fans raised over $1,000 for the Steele family during a passing of the helmet thru the stands.