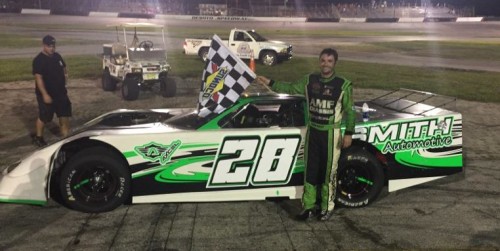 James Nanney used a series of cautions and restarts to work his way up to second place. He spent several laps on Firestine’s rear bumper before losing a little ground to the leader. Firestine was starting to catch the back of the field when a rear tire flew off Danny Daniels’ car right in front of the leaders to bring out another caution. Nanney was in position to challenge Firestine for the lead in the final laps before nearly spinning off turn four. Nanney’s misfortune moved Gibson up to second behind Firestine, who crossed the line first for an apparent victory. However, Firestine’s car failed post-race technical inspection, which handed the victory to Gibson – his first win of the season in the Street Stocks.

Danny Caylor recovered from a mid-race spin to finish second, while Rowland, who nearly spun and lost several spots after battling for the lead early, rounded out the podium. Barfield and Pete Close completed the top five in the seventy five lap, Summer Sizzler, Take Aim gun Range Street Stocks.

The Desoto-Auburndale Sportsman Series (DASS) was also on hand for Sportsman Madness 50, the last race for the class before their 200-lap Fall Brawl next month. Colin Allman and Patrick Thomas were battling for the lead on the seventh lap when they got together coming out of turn two. Thomas made hard contact with the outside wall, and several other cars – including Earl Beckner and Mike Smith – were collected in the melee. Beckner, who was running third at the time of the accident, was able to continue with very little damage and assumed the lead with fast-qualifier Sean Bass in the runner-up spot. Bass needed just five laps to get by Beckner for the top spot and quickly set sail from the rest of the field. His lead was evaporated when the caution flew just past the halfway point for Josh Borem’s spin.

Bass looked like he was on cruise control out front when another caution for Roger Welch’s blown engine bunched up the field again with 10 laps to go. During the caution, Beckner went into the pits a flat tire and lost his chance at a win. The final restart allowed Jason Vail and George Gorham one final shot at Bass for the lead, but Bass easily fought the pair off and drove away for the win. Vail held off Gorham for second, while Tom Zimmerman and Bruce
Bennett rounded out the top five.