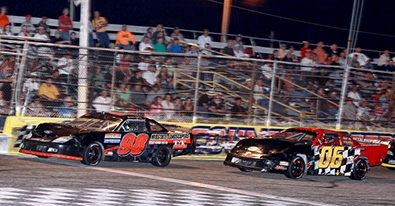 18 Modified Mini Stocks started off the night of hot racing action with time trial qualifying. Once all the drivers had taken their best shot at the time clock, Robbie Storer (19) came out on top with a lap of 14.86 seconds. Following him were Steve Griffin (5x) in 2nd, and James Ellis (98) in 3rd. After the fan determined 5 row invert, Kevin Harrod (06) would find himself on the pole position alongside LeRoy Moore (99). Harrod would jump out to the early lead with Moore settling into 2nd. Harrod would survive 3 early race cautions and hold onto the lead over Moore. 6th place starter Clint Foley (7) would find his way to 3rd just before a lap 5 restart, Foley would quickly move by Moore and Harrod  to the lead just after the green flag flew. Foley was now you leader with Harrod, Jeremy Gerstner (2), Moore, and Ellis following behind. The nights 1st serious incident would come at lap 21 as contact between Griffin and Moore would send cars sliding to avoid the incident. When the dust settle the cars of Moore and Chris Allen (33) received the worst end of the incident, ending their nights on the hook. Griffin would be sent to the rear for the 2nd time of the night for the restart. Foley would again lead on the restart, and pull out to nearly a half a lap lead over the rest of the field in short order. Behind him Ellis and Storer would get by Gerstner for 3rd and 4th respectively. Lap 43 would see the nights next serious incident. Griffin and Storer would make contact in turn 4 while battling for the 4th position. Storer would express his displeasure with the contact on the  front stretch by ramming into the side of Griffins car at the flag stand. Storer would bounce off the side of Griffins racer, and end up making heavy contact with the turn 1 wall, ending the fast qualifiers march to the front. Griffin would be sent to the rear for the 3rd time in the race. Under caution, an unexpected turn of events would change the entire complexion of this race. First the 5th running Gerstner would lose power and pull into the pits done for the night. Then the leader Foley would suffer the same fate, rolling into the pits with a engine problem. Suddenly, the man who had a nearly half a lap lead before the caution flew, was now out of the race with only 7 laps remaining. Kevin Harrod was now left in the catbirds seat, inheriting the lead with only 7 laps remaining. Behind him would be Ellis in 2nd, Phil Edwards (24) in 3rd, and Griffin found himself in 4th with all the cars retiring under the caution. The top 4 cars all had a chance to win this race, and 7 laps to get it done. Harrod would get a good restart, but Ellis went to work on the leader right away. Ellis worked over the back of Harrods car before finding a way by to take the lead at lap 46. As the top 4 cars exited turn 2 on lap 47, contact between Harrod and Edwards while racing for 2nd caused both drivers to check up. Griffin would use their misfortune to slip by both drivers and move to the 2nd position with only 2 laps remaining. Ellis would go on to take an exciting victory with Griffin coming home in 2nd, and Harrod in 3rd.

16 Super Late Models pulled onto the track for what was sure to be and action packed 35 lap feature. Drew Brannon (82) would take the pole position with Dale Sanders (1) just to his outside. At the drop of the green the action was non stop, the top two drivers raced side by side for the first 3 laps before Sanders muscled his way by on the high side to go to the lead. The 1st caution would fly at lap 10 for a crash involving Keith Zavrel (47x) and Randy Plantz (14), both cars suffered heavy damage, ending their shot at a victory. Sanders would lead on the restart, but was under constant pressure from a now faster Brannon. The next caution would fly at lap 14 for contact between two of the three championship contenders. Herb Neumann Jr (98) would attempt and inside pass on point leader Randy Anderson (4) in turn 3, both cars would make contact sending Anderson spinning and the caution flying. Neumann and Anderson both were sent to the rear for the restart. Sanders still was your leader, with Brannon in 2nd for the restart. Running 3rd was the other member of the championship battle, Scott Grossenbacher (09), who now knew his challengers were buried in the rear of the field. Sanders restarted in the lead, but Brannon again poured on the pressure at the drop of the green. As good as the race was up front, most of the attention was on the rear of the field where Neumann and Anderson restarted. Lap 17 saw the next caution fly for contact between Neumann and Anderson again, this time it was the bright orange 98 of Neumann that went for the spin, both were again sent to the rear for the restart. Green flew again, but was short lived as caution would fly again at lap 18. This time it was for contact between Shane Butler (121) and Anderson. While racing hard outside of Anderson, Butlers car would get loose in a pack of 4 cars, and then slid down the track into the side of Andersons racer. Butler would end up making hard contact with the turn 1 guardrail, ending his night. Anderson would then fall victim to the rule book under caution. Speedway rules state that any driver involved in 3 cautions in one regular feature event, will be black flagged and sent to the pits. This event combined with the two earlier, resulted in Anderson being sent to the pits for the rest of the night. This would have major championship implications that I will cover later. Back up front the race track faithful were pulling for Sanders to hold off Brannon. Sanders would drive his heart out after the restart, but Brannon proved to be too fast, and moved by to take the lead at lap 25. Brannon would go on to take his 2nd feature win of the 2012 season. Sanders came home a strong 2nd, with Grossenbacher in 3rd. Neumann would fight his was back to the 5th position at the checkers. Anderson had enjoyed a 2pt lead over Grossenbacher, and 8pt lead over Neumann coming into the nights races. Once the dust settled, Grossenbacher now holds the lead by 10pts over Neumann, and 15pts over Anderson in 3rd after he was credited with a 12th place finish for the night. With only 1 points paying race left coming up on October 27th, this ones going to come down to the wire. 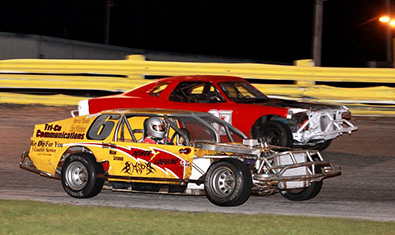 8 Pro Figure 8’s took the green in what was their final points race of the 2012 season. Going into the night Joey Catarelli (6) and Mason Love (01) started the feature event in a absolute tie for the championship lead. This meant that which ever driver finished ahead of the other, was your 2012 champion. Catarelli had the advantage of starting on the pole position, with Love having to race his way from the 7th starting position. The race would go green until the first caution near the halfway mark. Catarelli enjoyed a comfortable lead before the caution, but Love had raced his way to the 2nd, and now was on his bumper for the restart. This was it, driver versus driver for the championship. Catarelli was in this very same position last year, but a flat tire in that race ended his shot at the championship, losing to championship to Wayne Calkins. On the restart Love would hang just off the bumper of Catarelli, looking for a clean way by the leader. As the leaders caught lapped traffic near the end of the race. Catarelli was able to get through cleanly, while Love was slightly held up. That was all Catarelli needed, and he would go on to take the victory and the 2012 Pro figure 8 championship. Love would settle for 2nd well ahead of Justin Meyer (86) in 3rd.

In other racing action young Joey Bifaro (121) would survive a late race battle with John Makula (27) and Curtis Flanagan (3) to take his 1st ever Street Stock feature win. Point leader Bubba Martone (98) was your early leader, but transmission problems would end his night, and put a dent in his point lead. Flanagan would slip by Makula for 2nd coming to the checkered flag.

Jeremy Sharrone (32) would take his 11th feature win of 2012 in the Mini Stock division, Tim Scalise (24) would come home 2nd, and Kevin Stone (77) in 3rd. Shawn Bailey (98) was your Hornet division winner, and Doug Schmidt (8) was your winner for the South East Champ Kart Series.

This Saturday night could be the best night of the year at the speedway, this action packed night will be one not to miss. The race schedule will be headlined by the TBARA winged outlaw sprint cars, a 75 lap Open Wheel Modified Race, Sportsman, Street Stock, Pure Stock, Mini Stock, Figure 8’s, and the Pro Challenge cars will all be in action. Make sure to be in the stand for the 5:30 start time so you don’t miss any of the racing action!