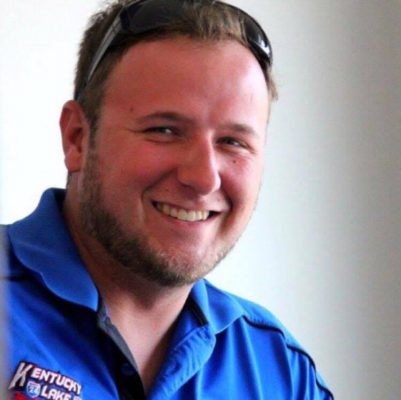 Irvine was promoted to the position of General Manager/Promoter of Kentucky Lake Motor Speedway toward the end of the 2014 season, and he then graduated from Murray State with a Bachelor’s Degree in Public Relations.

Irvine served in that position during the 2015 season until the track was shut down late in the season by the state government that exercised eminent domain for highway expansion. Irvine then moved to Paducah International Raceway where he served as the Race Director for the 2016 season.

Irvine is the second major hire by Lester in the last four months. Lester hired veteran motorsports official Roby Helm as the Fastrak President of Communications and Special Consultant in December of 2016. Lester said it was Helm that suggested Irvine for the position of Ultimate BoB Regional Director.

“Fastrak is growing at a rapid pace and there is more to come in the coming weeks,” Lester said. “Roby Helm and I were discussing bringing on someone to direct the Ultimate BoB Series, and he suggested D.J. Irvine. I trust Roby’s judgment, and he got me and D.J. together. I had to agree with Roby that D.J. is a good fit for us, and I’m confident he’s going to do a great job.”

Helm has had past experience working with Irvine while he was at Kentucky Lake Motor Speedway, and Helm was impressed with how Irvine conducted himself before, during, and after the races.

“For such a young man, I was really impressed with D.J. Irvine when I had the chance to work with him when the series I was working with at the time had an event at Kentucky Lake Motor Speedway,” Helm said. “Irvine had outstanding professionalism, and he showed me a rare talent nowadays in that he could multi-task.

“D.J. can promote and manage an event,” Helm said. “He can race direct the event, he can write the press releases, and if need be, he can pick up a microphone and announce the event. I’m proud to have him as a part of the Fastrak/Ultimate Team and I look forward to working with him in the years to come.”

Irvine is looking forward to this new challenge in his young career, and is thankful for Helm suggesting him to Lester for the position. Irvine is ready to jump right in and help finish the 2017 Ultimate BoB Series Schedule and then hit the ground running getting to know the series’ competitors.

“I’m excited to be named to the position and look forward to building the BoB Series into a premier regional series for Late Model drivers,” Irvine said. “Grassroots racing has a special place in my heart, since my grandfather raced on dirt. I’m ready to do my part to continue the sport’s growth, especially in this region.”

Check out the official website for the Ultimate Battle of the Bluegrass Series at www.ultimatesupers.com/BOBHome and continue to follow our social media networks for the Ultimate Battle of the Bluegrass Super Late Model Series to get up to the minute news and details as they become available.
THE 2016 MARKETING PARTNERS FOR THE FASTRAK RACING SERIES ARE CHEVROLET PERFORMANCE, HOOSIER RACING TIRE, VP RACING FUEL, BEYEA HEADERS, ROCKET CHASSIS, TNT RACE CARS, ARIZONA SPORT SHIRTS, ROCK AUTO.COM, AND THOMAS CLARKE PERFORMANCE.