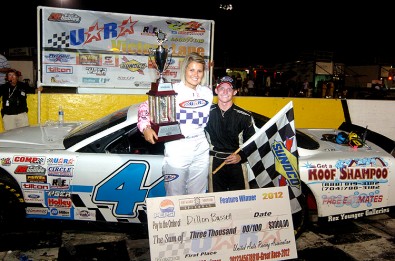 Hendersonville, NC (11/12/12) –During ‘The Classic 3 Championship’ weekend at the Rock, Travis Swaim and Dillon Bassett not only had the responsibility of focusing on the race, but the Championship as well.

After Bassett clinched the Sunoco Pole, Swaim only led the Championship points by 66.  Swaim’s team played out the different scenarios of how the race could go and what position they needed to maintain the points lead. The team was truly tested when Swaim started running hot only a few laps into the race. As he began to fall back into the field, the power steering on his machine was starting to fail. The only option was to come in a work on their car under green. 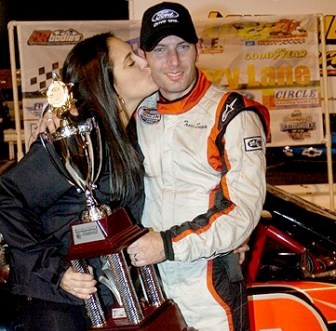 While Swaim’s team hustled to get back on the track, Bassett focused on winning the race. With the pressures of a potential championship, the 15 year-old rookie battled with Clay Rogers the entire race. Only to come up one position shy, Swaim was declared the official 2012 UARA Champion with an 18 point led. After a hard day of battling his race car, Swaim was relieved that his team’s hard work paid off.

Swaim’s team were not the only ones figuring out the different scenarios, the UARA officials had to be on their toes and prepared for anything on race day. According to the calculations, if a tie fell between the two drivers, the tie breaker would be the amount of wins. With both drivers having two wins this season, the officials had to look for another tie breaker, which would be the most runner-up finishes. Both drivers had two runner-up finishes prior to Rockingham. The next tie breaker would favor the driver who had the most third place finishes. Swaim lead with three while Bassett had two.

Prior to the season, both drivers had no intention on running for the championship. They were looking for experience and the development of new teams. After running the first couple races, they saw the potential their teams had and changed their goal.

“We’ve won several championships in the NASCAR series at a local track, but never ran at 80% of the tracks on the UARA tour,” says 2012 UARA Champion Swaim. “After struggling through our first race, we won the pole at Dillon. Then won the pole again at Rockingham, so it wasn’t until our first visit at The Rock that we realized we could run with these guys.”

“We just wanted to come out and run good, since it was our first season,” says 2012 Rookie of the Year Bassett. “We wanted to contend for ROY title, and never thought we would be Championship Contenders. As the season progressed, we started getting better and better. I couldn’t ask for anything more.”

Swaim and Bassett, along with the entire UARA-STARS have delivered action packed racing over the season.