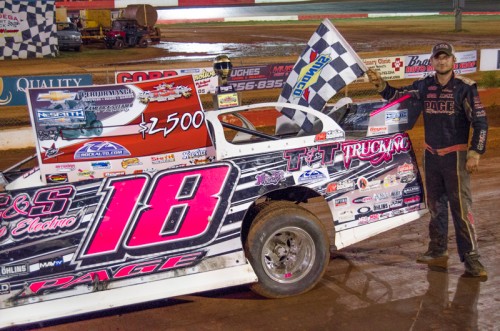 Page took the lead from the pole position at the start of the race, and at one point had a full straightaway lead over his nearest challengers, as several drivers battled for the second spot throughout the race.  Cory Hedgecock of Loudon, TN was looking for his third straight win in NeSmith Chevrolet Dirt Late Model Series competition and made things interesting at the finish.

Hedgecock drove around the outside of Cruz Skinner of Oxford, AL on lap 37 to take over the second spot.  With ten laps to go, Page encountered heavy lapped traffic, and began to pace himself to the finish.

With five laps to go, Hedgecock closed to within a few car lengths, but Page went to the outside to pass both Jake Teague of Oliver Springs, TN and Michael Blount of Sumrall, MS on lap 47, and that sealed the deal for the win.  Hedgecock had to settle for second in the Eagle Racing Engines Rocket and was the Cruise With The Champions Rookie of the Race.

“This is the best race car I’ve ever driven because we’ve raced it three times and won all three races,” Page said.  “We’re going to take it to the next NeSmith race in Cochran, GA and see if we can make it four for four!  We were on the bottom groove all night long, and my brother signaled me I had a big lead.  I tried to just take it easy in that lapped traffic at the end, but I knew Cory was coming fast, so I tried the outside and was able to put a couple of lapped cars between myself and Cory.”

Scott Dedwylder of Vossburg, MS took the fifth spot in the Scott’s Body Works and Towing Special and Jimmy Elliott of Cleveland, TN drove the Elliott’s Tire Center Special to a sixth-place finish.  John Ownbey of Cleveland, TN was seventh in the Sam’s Restaurant Equipment Special.

Jake Knowles of Rome, GA was the Beyea Headers Hard Charger of the Race after starting 15th and finishing eighth in the Coosa Heating and Cooling Rocket.  Richie Stephens of Smith Station, AL took the ninth spot and Chase Edge of LaFayette, AL rounded out the top ten in the Edge’s Gas Company Special.  The Sunoco Young Gun of the Race was 14-year-old Will Roland of Jasper, GA, who finished 18th in the Roland Tire Warrior.

Hedgecock remains the NeSmith Chevrolet Dirt Late Model Series point leader after the three races of the 2016 season, and holds a 22 point lead over Dedwylder, who has a ten point advantage over Edge.  Ownby is fourth, six points behind Edge and eight points ahead of Brandon Williams of Crossville, TN, who is fifth in the Autozone CVR.

In preliminary action, Page was the Group 1 Fast Qualifier and the fast qualifier overall among the 49 entrants with a lap around Talladega Short Track in 14.701 seconds.  Skinner was the Fast Qualifier in Group 2 with a lap in 14.946 seconds.

The four ten-lap B-Main races were won by Kevin Sitton of Baytown, TX in the Mirage Construction Special, Edge, Buddy George of Ragland, AL in the George Racing Special, and Blount in the Magnolia Auto Transport Special.

Page took the lead at the start of the race followed by Skinner, Elliott, Hedgecock, and Dedwylder.  Hedgecock dove under Elliott on lap three to take over the third spot.  Johnson and Knowles were working their way through the field and passed Ownbey to take sixth and seventh respectively on lap 15.

Lap 16 saw Page encounter the cars on the tail end of the lead lap, but Skinner and Hedgecock were battling for second, and unable to gain any ground on the leader.  Johnson and Knowles moved up to wage a three-wide battle for fifth with Dedwylder on lap 20.  Johnson made the big move on lap 23 and got by Elliott for the fourth spot.

Page had a comfortable full straightaway lead on Skinner and Hedgecock at the halfway point on lap 25.  Hedgecock stayed on the high side of the track in his challenge of Skinner and the second spot.  When Hedgecock worked around Skinner on lap 37, he stayed on the top shelf and made up half the distance on Page by lap 43.

With three laps to go and Hedgecock closing fast, Page went to the outside for the first time in the race and put two lapped cars between himself and Hedgecock.  Page then went on to take a 1.527 second margin of victory to the checkered flag.

The next race for the NeSmith Chevrolet Dirt Late Model Series will be on May 21 at Cochran Motor Speedway in Cochran, GA with a 60-lap $4,000-to-win event featuring extra laps and extra cash in all positions.

OFFICIAL RESULTS OF ROUND 3 AT TALLADEGA SHORT TRACK ON EASTABOGA, AL ON 4/30/16:

GROUP QUALIFYING (Top 5 In Each Group Transfers To Main Event):