Alltech Raceway, April 17th, 2021 the Florida Late Model Challenge Series will race for $5,000 to Win! The Heat races will pay the winners and Contingency Awards will be announced before the race.
Shan Smith has won the last two Series Races and is fresh off a Podium Finish at the Bristol Dirt Car Nationals, he hopes to keep his streak alive and win a State Championship.
Several Past Champions are trying to keep that from happening in the highest paying Florida Late Model Challenge Series Race ever!
Race will be Streamed live on: 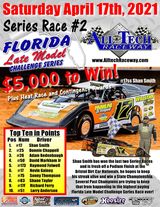