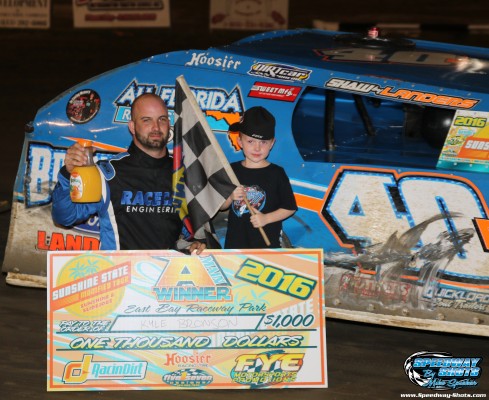 TAMPA, FL (February 1, 2016) – The fourth and final night of racing at East Bay Raceway Park for the Sunshine State Modified Tour (SSMT) was capped off with a wild 25-lap main event. After being involved in a big pile up at the midpoint of the race, Kyle Bronson rallied to pick up the victory.

Allen Weisser and the winner of the inaugural SSMT A-main, Kevin Adams, lined up on the front row. Adams jumped out to the early lead in a race that was stricken early by multiple cautions. Devin Dixon looked strong at the get go as he made the pass on Weisser for second. Bronson, who started in the fifth position, looked to be the class of the field, however, as he quickly moved up to third on lap two.

As the leaders charged into turn one on lap three, Bronson made a bold move to the outside of Dixon, but got crossed up at the exit of the corner. Bronson slid across the race track in front of the field where he collected six other competitors before everybody came to rest. As a result, four drivers were forced to retire from the event due to extensive damage, including Sunday night’s winner Roger Crouse.

Bronson was able to continue racing despite damage to the front end of his Brandon Ford number 40B and restarted back in the 13th position. Within six laps Bronson had moved up into the top three and set his sights on Adams and Dixon. On lap 10 Bronson moved by Dixon for second and flew by Adams for the lead on the following lap.

Not far behind Bronson was 17th place starter, Ray Bollinger, who cracked the top three on lap 15. With just five laps to go, Bollinger had moved into second and gave Bronson a serious challenge for the point. The two drivers battled side by side for two consecutive laps, but Bronson was able to fend off Bollinger’s threat.

From there Bronson pulled out to a substantial lead and took the checkers by a margin of two-and-a-half seconds over Bollinger. Hometown driver, Steve Miller, came home third, with Devin Dixon in fourth. After falling back to 21st early on, Mike Van Genderen rounded out the top five and regained the SSMT point lead.