This author has not yet filled in any details.
So far Jane Smith has created 910 blog entries.

The 2010 Checkered Flag Sprint Series driver points Champion is Mark Gimmler and Mark’s dad and car owner, Norm Gimmler, is the car owner Champion. Mark had an outstanding year winning one feature and finishing outside the top six only one time.  Great job Mark!

Finishing second and winning the Rookie of the Year award for 2010 is Jimmy Alvis, Jr. He also had one feature win in 2010.  Rounding out the top five in third place is Gary Gimmler, in fourth place Keith Butler and in fifth place Amanda Ferguson. This year’s point’s race was a very close fought battle all year long with the top five separated by only 32 points at the end.

CFSS would like to thank all the racers and fans for all the support they have given this year. 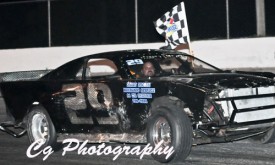 After several weeks of picture-perfect weather, fans had to brave some cool temperatures Saturday night at Auburndale Speedway but were treated to some great red-hot racing.

Another good field of Street Stocks saw Bobby Mobley and point leader Matt McCrary win the heat races and start the 20 lap feature from the front row. McCrary set the pace for the first pair of laps before Mobley got by on the low side to snatch the top spot on lap three. END_OF_DOCUMENT_TOKEN_TO_BE_REPLACED

by Marty Little
INVERNESS, Fla. –  Brian Gingras took the lead from Larry Brazil on lap 18 and sped to his first TBARA sprint car feature event of the season in the 30 lap run. While Gingras won the battle sixth finishing Shane Butler won the war to become the 2010 series champion.
Brazil paced the 17 car field from his outside front row starting position but a yellow flag waved on lap 2 when Sonny Hartley hit the turn one wall and went airborne out of the park. He landed on all fours and was not injured and the car sustained minimal damage as well.
On the restart it was still the second generation Brazil in command with Gingras and others working toward the front. A quick yellow flag on lap 13 for debris on the track regrouped the field but it was back to green but five laps later yet another yellow flew for the spinning car of point leader Butler. By this time Gringras was on Brazil’s back bumper and on the restart Gingras zipped by Brazil and into the lead. Dude Teate, who has been red hot the second half of the season worked by Brazil for second but Gingras was very strong this night.
On lap 25 the final yellow flag of the evening waved for Ben Fritz as he looped his bright red mount with no damage and was able to restart. When the green reappeared it was all Gingras as he ran the final few laps out front over Teate, Brazil, Ray Bragg, Jr. and rookie Brian Riddle. The second five consisted of Butler, Bo Hartley, Mickey Kempgens, Johnny Gilbertson and Fritz.
Heat race victories fell to Brazil and Fritz.
First heat (8 laps) – 1. Johnny Gilbertson, 2. Shane Butler, 3. Dakotah Stevens, 4. Bryan Riddle, 5. Matt Hall, 6. Frankie Hurst, 7. Tommy Nichols.
Second heat (8 laps) – 1. Ben Fritz, 2. Brian Gingras, 3. Ray Bragg, Jr., 4. Dude Teate, 5. Sonny Hartley, 6. Bo Hartley, 7. Tony Carino, 8. Larry Brazil, Jr. 9. Skeeter Faulconer.
Feature (30 laps) – 1. Gingras, 2. Teate, 3. Brazil, 4. Bragg, Jr., 5. Riddle, 6. Butler, 7. B. Hartley, 8. Kempgens, 9. Gilbertson, 10. Fritz, 11. Carino, 12. Hall, 13. Brazil, Jr., 14. Faulconer, 15. Hurst, 16. S. Hartley, 17. Nichols DNS, 18. Stephens DQ.
By Jane Smith|2010-11-09T16:07:27+00:00November 8th, 2010|Citrus County Speedway, Race Results|Comments Off on Brian Gingras tops TBARA at Citrus County Speedway
Read More

Cooler temperatures hit the Bay area this week but the action at Eastbay Raceway Park was as hot as ever. Five classes were in action as the season hit the month of November and the final points drive for the championship in all classes. A packed grandstand witnessed a great night of racing action.

The Outlaw 4’s were first on the feature card as Shirlene Hammond picked up her first win of the year. Hammond started on the front row and held off the challenge of Billy Howard. Howard finished 2nd. Points leader Matthew Haynes finished 3rd. Brittany Yates and Roberto Morfin, Jr. rounded out the top-5. Howard and Jody Robbins won the heats. END_OF_DOCUMENT_TOKEN_TO_BE_REPLACED

Unfortunately, the Checkered Flag Sprint Series 2010 season has been cut short.  A purse restructure proposed by Punta Gorda Speedway midway through our season was not acceptable.   The established purse had been in effect for the past 2 ¾ seasons.  We understand that these are hard economic times and will strive to negotiate with Punta Gorda Speedway to come up with a more equitable solution.  It is our goal to be back racing there in 2011.